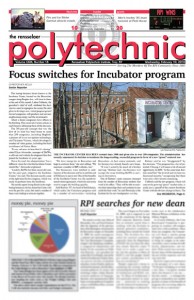 The startup business haven known as the Incubator Center will close its doors at the end of this month. Laban Coblentz, the president’s chief of staff, attributed the decision to a need to repurpose the Center. He cited plans to develop a new, virtual program geared toward companies with products and services emphasizing energy and the environment.

About a dozen companies have offices in the building, which is located along Peoples Ave., on the Rensselaer campus. They received eviction notices in mid-January informing them of the decision.

The 30-year-old concept that was the first of its kind has been home to more than 250 companies, including MapInfo, a pioneer of in-car navigation technology, and Vicarious Visions, which developed a number of video games, including the third installment of Guitar Hero.

“It was sad news to hear that it’s closing,” stated Elyse Alexander, manager of BelWo, a software and website development firm that joined the Incubator six years ago.

Down the road, the administration “has a different vision for what the Incubator Center should be,” Alexander explained.

“Luckily, BelWo has been successful and, for the most part, outgrown the Incubator Center,” she said. The decision mostly came at the right time for her company, which was ready to graduate from the Incubator.

She mostly regrets losing friends in the neighboring businesses she has shared the Center with over the past few years, but noted a number of them were looking to relocate together.

“We have strong ties to Rensselaer and hope to continue them,” she said, adding, “We maintain a number of RPI websites, too.”

The businesses were notified in mid-January of the decision and have until the end of February to move out. One of the benefits of the Incubator Center was the month-to-month rental agreement, which the university used to empty the building quickly.

Judd Rattner ’07, the head of Intellidemia, which makes the Concourse program used by a number of universities—including Rensselaer—to host course materials, said his business has already found a new home. “It won’t actually be much of a burden moving,” Rattner said—his business will occupy the same building BelWo is moving to downtown. One of Rattner’s main concerns stemmed from the number of Rensselaer students that work in his office. “They will be able to maintain their internships there and continue to earn credit for their work,” he said. Proximity to the Institute for his new headquarters was key.

Rattner said he was “disappointed” by the decision. “The program has a lot of potential. Closing it will mean a lot of missed opportunity for RPI.” At the same time, Rattner noted that “the level of activity here has decreased recently,” recognizing that there were only a few tenants remaining.

Coblentz said the new program, which will cater to the growing “green” market niche, is really just a spinoff of the current Incubator Center with the obvious change in focus. The new program will aim to locate companies downtown and provide funding through special grants that target green companies.

The new program will look to meet the “needs of startups today versus 30 years ago,” Coblentz explained. Only a small number of companies currently in the Incubator Center fit into this new program and will be allowed to continue in the program, although in a new location.

The virtual aspect of the program is still in development, but will offer focused services including assistance finding grants and raising venture capital funds and legal services.

A number of other businesses currently involved with the virtual side of the existing Incubator Center—especially green businesses—have seen an increased need for special facilities such as lab space. The new program will look to offer the flexibility of allowing the green companies to find their own space while receiving special services.

Students with commercial ventures that don’t have a green emphasis will still be able to seek assistance through the Office of Entrepreneurship and the Severino Center for Technological Entrepreneurship.

It is unclear what the space of the Incubator Center, which occupies a wing of the J Building at the north end of campus, will be used for. The growing need for academic space on-campus points to the possibility of a conversion to classrooms and other offices. It may also lead to a number of administrative offices in downtown moving up the hill. Coblentz said a decision would not be made until much further in the year.

The Incubator Center was first proposed by the late Harry Apkarian ’46, a former member of the Board of Trustees. After Apkarian passed away last March, President Shirley Ann Jackson called the Incubator, “a swift and stunning success,” when it opened in 1980, adding it “quickly became the envy, and the model, of universities everywhere, focusing on its core mission of ‘giving life to new ideas.’”